Flock to SoCal to cure your Monday-itis with Comedy

No one like a Monday, it’s the furthest away from the weekend you’ll ever be and the mood is universally low.

Here at SoCal, we’re all about the good times so we put some brainpower into making them better and came up with (what we think is) the most logical cure…laughter. It is said to be the best medicine after all!

We’ve teamed up with our pals at Laugh Mob to launch the Funny Flamingo Comedy Club and here’s 6 reasons why it’ll make your Monday a whole lot better. 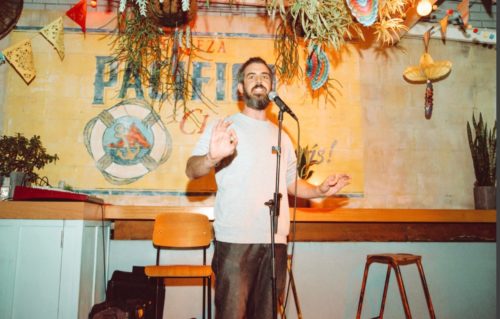 ONE: Comedy can relieve stress

Mondays are hard enough as it is; a thousand emails, another five days until the weekend, still hungover from Saturday…

Laughing reduces stress hormone levels, such as cortisol and epinephrine. This creates a relaxed environment for both your mind and body and will get you on track for the rest of the week.

Big weekend that ended up in a few late night trips to the kebab shop? Burn it off the following Monday with some serious roffeling. A researcher from Vanderbilt University found laughing for 10-15 minutes can potentially burn up to 50 calories. 2 hours at the Funny Flamingo Comedy Club and that’s around 400 calories!

Does anyone’s brain function well on a Monday? Laughter engages sections of the brain which are involved in cognition, movement and emotional perception. The multiple neural processes involved in laughter makes attending a comedy show quite a complex activity for the brain. “Comedy is like mental exercise, and just as physical exercise strengthens the body, comedy pumps up the mind”

FOUR: A comedy show turns that frown upside down

Not only does laughter trigger the release of endorphins (the body’s natural feel-good chemicals), but looking at the funny side can put problems into perspective and enable you to let go of any built up anger about the dishes being left in the sink AGAIN.

FIVE: Attending a comedy show can strengthen your immune system

Monday-itis is bad enough, you wouldn’t want to be coming down with anything else! Laughter decreases stress hormones and increases immune cells and infection-fighting antibodies, thus improving your resistance to disease.

‘Having a quiet one’ is no longer a valid excuse when you want to relax. Turns out having a good LOL increases oxygen flow and helps relieve all that physical tension built up from a long Monday, therefore attending a comedy show is more beneficial for relaxing than a night in. There we have it, laughter really is the best medicine. Next time you feel Monday-itis brewing, flock to the Funny Flamingo Comedy Club for a frollicking good time!